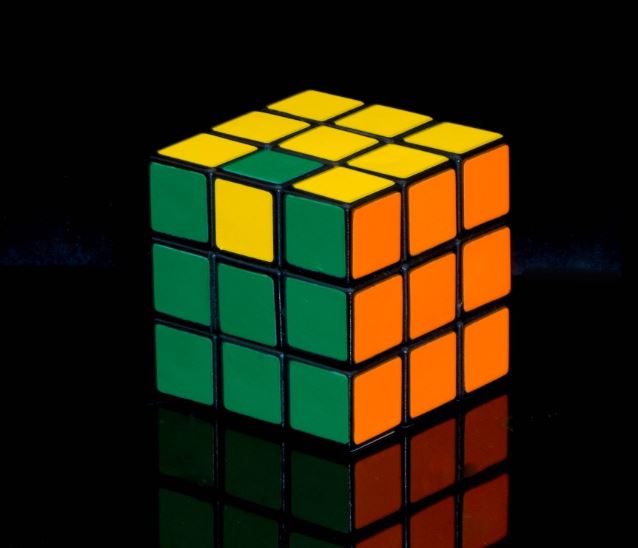 I Googled “rubric” just to see what kind of images came up, and up popped Rubik’s Cube. This is actually a perfect symbol of the way I feel about any rubric placed in front of me. It’s almost there, but not quite right. No amount of tweaking ever gets it to where I want it to be. And if I somehow get to that sweet rubric spot, someone else will look at it, and see the cube above. The tweaking begins again.

So what is the point of a rubric, and in our case, a math writing rubric? As we debated and wordsmithed and debated some more, we knew that we wanted it to be :

If we reduce a piece of writing down to just a grade, then only the grade is recorded in the student brain, not the corresponding learning. We considered a single point rubric, but also thought about whether teachers wanted to write more feedback or highlight feedback on the rubric itself. To save teacher time, the single point rubric has been tabled, but may be revisited at a later time. We considered the feedback from teachers in our last cohort and used their thinking to improve the rubric.

We borrowed language from the SBAC. When stuck on a rubric for a piece of work, I like to use the score description words. Does this feel like a Full & Complete answer, or at least a Reasonable one? Maybe it’s Partial, and not quite Reasonable. Now that I have a feeling on where it falls, I can look at that column to find bullet points or adjust up and down accordingly. We purposely left score “points” off. While we might have labeled this 4, 3, 2, or 1, we chose instead to avoid the idea of giving it a “score”. I know this is a tough one for teachers, who have requirements at varying levels to have documented grades in the gradebook.

Coherence between the lessons and the evaluation were important to us. We used language from the writing lessons we have been developing for our own use as the criteria for evaluation. What we saw from scoring tons of papers using our old rubric is that we would have decent explanations from some students – who had serious math misconceptions. It is lovely to read their writing to understand better their thinking process and misconceptions, so in terms of explanation and justification, they would have scored much higher. But in a holistic rubric, where one of the requirements was correctness, we ended up with a whole slew of the same low score. In using criteria, we hoped to discriminate between correctness and justification in order to better target the needs of the student or group.

We also wanted to link the criteria to the Standards for Mathematical Practice (SMPs) so that we could build awareness and understanding of them. Writing is not the only way to evaluate the SMP’s, but it certainly lends itself to being one way to see how a student is using the practices.

I have to admit, to put so much work into something that looks so simple is really quite humbling. Not to mention, even though this is not my work alone, I’m definitely feeling vulnerable sharing it out. With that said, I’m also constantly inspired by Graham Fletcher’s quote, “All of us are smarter than one of us.” So, I put it out here for feedback and sharing.

How Would I Use It?

First, our lesson series basically has students come up with these on their own. In introducing this rubric, I’d show how it connects to what they have identified as valuable in mathematical argumentation. Once students have had that grand conversation, then we’d go over the wording in this rubric, and trace how it changes from stage to stage. Academic language such as “accurate”, “element”, and “logic” would need to be addressed, along with any others that may be confusing to students.

We’d evaluate preselected anchor papers together, which is part of our lesson series. Discussion among partners, groups, and whole class would help calibrate our understanding of each level and criteria.

After some lessons on how to write mathematical argument (a topic for another day), we’d use one row for partners to give feedback to each other. As teachers, I’d use a preselected row to give feedback on. As proficiency grows, I might use the rubric to score a class and look at where the scores fall. Do I have a lot of Full & Complete for direct response, but only partial for justification? Might be a need for a whole class reteach. Do I have a small group that have Partial for direct response? Might pull a small group and work on identifying the question or statement to defend, and how to make sure I’ve directly responded to it.

I always put myself back in my classroom shoes, where I know my next question is “How do I grade it?” Now that I know more, I’d tell myself, “Don’t. Give feedback instead.” Eventually though, I want to report progress. So, once they’ve had plenty of feedback, I might assign a task as an assessment – when I know they understand the expectations. In my grade level PLC I’d want to determine what constitutes an “A” across the classrooms. I might collect tasks along the way as a portfolio, and look for growth. I also might play around with the concept of A/B/C/D and decide which descriptor warrants the A. Quite honestly I’d err on the positive side as long as I saw a progression in their learning. It’s not the grade that matters. It’s the learning.

For us, our next steps are to test this out with some class sets that we’ve saved from our writing series. We want to calibrate and see if there is anything we are missing or inconsistencies that make the rubric confusing. We will update our series of lessons to include this version 2.0 of our rubric. And this summer, we present again. We’ll offer extended coaching in the fall, learn more with some new teachers and share out with our prior early adopters. During that time, we’ll measure again for growth with this new tool. We predict we will see more targeted data to help us better identify needs for our lessons and/or task selection.

Leave thoughts in the comments! I’d love to hear your tweaks to our rubric, or ideas for using in the classroom.

a community for number string design

MAKE THEM MASTER IT

CONNECTING TEACHERS TO INTENSIFY OUR IMPACT

Trying to be a better teacher

In Math, the Journey IS the Destination.